Bringing the Catholic Teaching to the Public Square as Priorities Shift 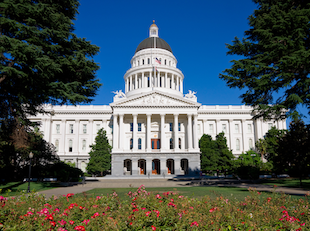 “A just society must be the achievement of politics, not of the Church,” said Pope Benedict XVI in Deus Caritas Est. “Yet the promotion of justice through efforts to bring about openness of mind and will to the demands of the common good is something which concerns the Church deeply.”

Over the course of its five decades, the California Catholic Conference faced many significant legislative campaigns.  The bishops, staff, and lobbyists offer the Church’s wisdom, counsel, and experience to those who craft public policy in the public square.  Over the Conference’s 50-years, that effort has seen history-changing debates, evolving societal norms, and the ebb and flow of political tides.  This article touches on some of the most noteworthy.

Every year an avalanche of more than 5,000 proposed laws inundates Sacramento.

Every year, staffers at the California Catholic Conference (CCC) sift out 800 – 1,000 of those bills for special attention. They prioritize the bills – some they engage heavily, others are monitored.  The staff engages in the public policy debate depending on how each proposal advances life, promotes the common good, protects the dignity of workers, or impacts any of the other principles enumerated in Catholic social teaching.

“We are doing holy work,” said Bishop John Cummins, bishop emeritus of the Diocese of Oakland, who in 1971 was the founding executive director of the CCC.

“To associate that with politics in our time can be questioned, but it’s true. You take the leaven of the gospel, translated through Catholic social teaching, and make that part of the dialogue.”

For a half-century, “We’ve face poverty issues, human trafficking issues, abortion issues, and so many others – year after year after year,” said Linda Wanner, a CCC lobbyist.   “We have to continue the fight, no matter how long it takes.”

Addressing the real needs of those who are poor is a constant. For instance, a current priority is expanding CalFresh -- the program once known as food stamps -- for seniors and students.

Many legislative efforts take years.  After lobbying for more than 15 years, for instance, in 2016, the CCC celebrated the creation of the California Earned Income Tax Credit (Cal EITC) for low-wage workers.

The immigration debate is another issue that has been debated for decades as policy priorities change.

In 1986, after President Ronald Reagan created a window for undocumented immigrants to pursue citizenship, the conference backed an emergency measure that funded English and civics classes for them.

Then-Father Jaime Soto, now bishop of Sacramento, was director of immigration services at Catholic Charities in Orange, teaching people how to take the steps toward citizenship.

By the mid-1990s, “You had significant numbers of Latinos becoming citizens, and they were voting,” he said.  They also were running for office and winning. They bought homes vacated by high tech workers who lost their jobs due to a downturn in the aerospace industry.”

Then the backlash began, culminating in Proposition 187 to “Save Our State” by denying basic services – including emergency healthcare -- to undocumented residents.

“One of the first groups to come out against Prop 187 after it qualified for the ballot was the California bishops,” Bishop Soto said. Though the initiative passed, most of it was nullified by the courts.

The political dynamics surrounding migrants in California are different now.  Recent efforts for immigrants have had clear-cut success. After a two-decade campaign, in 2013, California adopted special driver’s licenses for undocumented residents.  Funding for migration legal services and compassionate care remain among today’s priorities.

Restorative justice – prison reform and aid to victims – has been a signature issue for the Conference, which promotes rehabilitation of offenders and attention to the often unseen needs of victims. An overarching achievement was rewriting the penal code to emphasize rehabilitation and public safety over punishment.

In a 2016 meeting with the bishops, then Gov. Jerry Brown urged the Conference to work toward sentencing reform in the Golden State.  Conference staff and advisors drafted the bill, rallying support from interfaith and civic leaders. According to Wanner, they recruited Assemblywoman Shirley Weber (D-San Diego), now California’s secretary of state, as the sponsor and organized supporting testimony.

Garnering legislative sympathy for unborn children in California has been far more difficult and frustrating.

Despite tremendous resistance in liberal California, Dolejsi said, “We have been occasionally successful from a public policy standpoint in slowing the expansion of abortion or in expanding good alternatives.”

For instance, the Conference helped fight off state attempts to undermine pro-life crisis pregnancy centers. It supports state programs that give struggling parents assistance to raise their children.

In 2016, the Conference joined a coalition that forced the repeal of California’s “maximum family grant,” which had denied additional benefits to families with a new baby if they had received aid in the ten previous months.

Preventing physician-assisted suicide has also been an ongoing concern.  Efforts to legalize the practice had been underway for at least three decades.

Then, in 2015 with a highly irregular move, suicide proponents pushed it through during a special session on Medi-Cal funding. Now they are trying to erase its few protections, including the 15-day waiting period, a mental health evaluation by a licensed psychiatrist or psychologist, and a mandated 2026 sunset on the law.  Conference opposition to this horrendous practice continues.

Empowering parents as the primary educators of their children is a constant priority, as is school safety. In 2014, the CCC advocated for stronger abuse prevention in public schools, which had lagged in Catholic schools in procedures to ban teachers who had abused students.

“No one in the public sector does [child protection] training better than the Church does right now, and we’ve done it for the past 18 years,” Dolejsi said.

That knowledge of how to protect young people came at a high price – both to victims and the Church.

In 2002, the legislature passed a one-year “window” in which adults who had been abused decades earlier could sue the Church, despite being far outside the statute of limitations. California dioceses paid more than $1 billion to victims. In 2018, the legislature opened another three-year window.

“The civil liability of sexual abuse, both legislatively and in public opinion, has occupied a significant amount of our time and energy,” Dolejsi said.

The Church made many mistakes – as bishops and popes have made clear -- but one abuse-related bill went too far for California legislators by threatening the seal of confession.

The CCC brought in a canon lawyer who also has a civil law degree to explain the sacrament to legislators and help them separate fact from fiction. More than 40,000 grassroots Catholics contacted their legislators.

“It was a perfect example of explaining both the public benefit and the religious aspects of an issue,” Steve Pehanich, director of communications and advocacy, said. “Civil law has long recognized the need for people enter into private counseling and communications with a minister or counselor and for the need to keep that discussion confidential.”

The bill was withdrawn by lawmakers.

Perhaps the most pastorally and politically difficult issue of the past few decades was Proposition 8, a 2008 initiative to codify that, “Only marriage between and man and woman is valid or recognized in California.”

The Church emphasized that traditional marriage is the building block of society a strong society. The bishops argued that California law already gave same-sex domestic partners the same rights, protections, and benefits as married persons.

The passage of Prop 8 felt like an affirmation of the Church’s voice in the public square. But societal norms continued to change, and six years later, the U.S. Supreme Court legalized same-sex marriage nationwide.

Environmental stewardship is a newer priority, catalyzed by Pope Francis’ 2015 encyclical on care for creation, Laudato si’. The CCC hosted a day of reflection on the encyclical among bishops, legislators, and their staff.

The legislature then passed a resolution saying that the lawmakers should consider the policy implications of the encyclical and seek testimony from religious leaders.

Pope Francis’ call to walk with people, regardless of differences, describes what the conference has done for 50 years.

“The work of accompaniment is fundamental in that it’s often hard to define our work by success,” Bishop Soto said. “We do the work not always because we will be successful, but because it’s the right thing to do.”

Bringing the Catholic Teaching to the Public Square as Priorities Shift
Over the course of its five decades, the California Catholic Conference faced many significant legislative campaigns.  The bishops, staff, and lobbyists offer the Church’s wisdom, counsel, and experience to those who craft public policy in the public square.  Over the Conference’s 50-years, that effort has seen history-changing debates, evolving societal norms, and the ebb and flow of political tides.  This article touches on some of the most noteworthy.