In Search of the Common Good

For five consecutive years California has stood on the edge of a budgetary abyss. The state’s credit rating has been seriously eroded. Severe cuts have been made in key social programs with profound implications for the dignity of the human person and the nature of our social compact. Decades of disparate policy in the areas of tax, expenditure and pension structures have created ever-increasing dilemmas with no short-term solution.

Yet amidst this deepening fiscal crisis, political dialogue has failed to identify a path forward, despite strenuous efforts by many in state government. Partisan dynamics have blocked the crafting of hard but necessary solutions that will genuinely address the enduring problems built into California’s budgetary house of cards.Major elements necessary for genuine remedies for our state’s financial woes are declared “off the table” by both political parties as well as by the vested interests that support them. Policy is dictated more by stalemate and impasse rather than by a search for compromise on solutions that will best serve the interests of all Californians.

In such a climate it is necessary to underscore that the budgetary struggle crippling California is not merely political in nature or implications. Rather, it concerns profound moral questions about who are we as a society, how we view our future and whether as a people we can look beyond our own self-interest to the interest of the larger society. Much of the inability of our political leaders to forge workable solutions to the real budget dilemmas arises from the lack of a common moral frame of reference for evaluating the tradeoffs that lie before us. For this reason we speak as the Catholic bishops of California on the budgetary crisis that confronts our state.

We speak as pastors of those who operate California’s small and large businesses, who teach in our schools, who work in our fields, who staff our local governments, who are unemployed. We also speak as providers of education, social and health services who know firsthand the effects of cutbacks in programs that form the social safety net of our state. We speak as employers who meet payrolls in our parishes, schools and social service agencies, and who understand the problems of rising costs, particularly in the field of health care. Most of all we speak out of the two thousand year old tradition of ethical analysis and moral insight that is contained in Catholic social teaching. We hope that our tradition, in concert with those of other religious communities, can provide a frame of reference for a deeper and ethically-infused public dialogue about the budgetary problems that confront our state.

Four Foundations for a Moral Dialogue about the Budget

The dignity of the human person is the first permanent principle of Catholic social teaching. Every man, woman and child is made in the image of God and possesses a piercing claim to equality of treatment and dignity. The sanctity of life is the root of all human rights. In any discussion of budget priorities, the threshold rights of life, food, shelter and medical care must be seen as the highest priorities.

Court rulings and California politics have eroded the right to life for decades, even now we continue to subsidize abortion as other health care programs are slashed. The remaining threshold rights– food, shelter and medical care – form the societal safety net that nourishes and safeguards human life and dignity in our state. Any effort to balance the budget by more deeply eroding respect for life and this safety net is incompatible with a genuine regard for the dignity of the human person.

The pursuit of the common good represents the second principle of Catholic social teaching regarding society and the state. The common good rejects the notion that society’s decisions should be determined by the clash of partisan, economic and political interests in a way that lets power dominate over justice. Indeed, the notion of the common good rejects the pursuit of only our own interests in the political process at the expense of the good of the society as a whole. It was this issue that led the Founders of our nation to place a substantive responsibility upon religious communities to contribute to the public debate at key moments. The Founders were deeply worried that at moments of crisis in the United States, self-interest and partisan interest would overwhelm the common good in a way that religious and ethical perspectives might help to mitigate.

We are now at such a moment in California. There are those who, citing the recent uptick in state income, wish to put off lasting solutions for another year, to avoid hard choices now. But the common good of our state demands that a substantive budget solution emerge this year that is not temporary, not stopgap, not illusory. Such a structure can only proceed from a balanced effort to discern the common good by asking what best serves our society. The search for such a solution must begin with all options being open for discussion. The pattern of using political power to block discussion on items that will be vital to any enduring, balanced reform such as tax and pension reform must be replaced by a perspective of comprehensive scrutiny that evaluates each proposal in depth for its ability to contribute fairly to an enduring solution rooted in the common good of California as a whole.

The third principle of Catholic social teaching that can help form the framework for an ethical discussion regarding the California budget is the principle of subsidiarity. The principle of subsidiarity requires policies that recognize the central importance of the multitude of human relationships and actions that lie beyond the realm of the state. These policies should promote families, religious communities, business enterprises, labor unions, charitable associations, cultural institutions and local government. The principle of subsidiarity has profound implications for the budget debate. It requires that taxation policies should be designed to collect needed revenues in a manner that contributes to the economic vitality, human welfare, and charitable endeavors in California rather than hobbling them.   It suggests that recent proposals to bring current state services to the local level should be pursued as long as that transition does not unload new burdens on local governments without the means for sustainable funding.

But the same principle of subsidiarity also calls upon the people of the state to cultivate the ability of all to participate meaningfully in economic and social life. Those who are poor and marginalized deserve opportunities to participate fully in the economic mainstream of American life, enjoying the full fruits of our society. It is just such opportunities that are threatened when further reductions of resources for education are entertained. Sufficient funds, as well as the effective deployment of those limited resources, touches at the heart of the next generation’s ability to participate effectively in the economic and cultural life of a global society.

The principle of solidarity constitutes the final major principle of Catholic teaching on society and the state. In the present moment, this facet of Catholic teaching is urgently needed to solve the budget crisis, not merely among those leaders entrusted with the arduous task of budget deliberations, but among all Californians. For the principle of solidarity is really an attitude rooted in the recognition that all of us derive our material possessions, our educational and professional achievements, and our cultural riches not merely through individual initiative, or through the support of our families, but also from the common fabric of California society in which we are all woven together and are blessed to live. The principle of solidarity requires all citizens to cultivate a deeper awareness that we are all beneficiaries of the efforts of so many and therefore, debtors to the society of which we are a part.

This personal recognition that we are all invested in the common welfare of California must transform the debate on California’s budget priorities into a true dialogue about shared sacrifice among partners. The acceptance of shared sacrifice is crucial in an era of increasing concentration of wealth and disparity of income in society. Further reduction in the net present tax burden with the full realization that the poor, fragile and forgotten will experience the cruel consequences is unacceptable.

An outlook of shared sacrifice will recognize that the contracts of public employees must seek a realignment that is fair and sustainable, but not disproportionate. The call for shared sacrifice will make clear that we cannot pass our fiscal burdens on to the next generation through illusory budgetary gimmicks and more borrowing, we cannot shred the safety net for our poorest sisters and brothers and we cannot deprive our children of a quality education that prepares them for an ever more complex and competitive world.

Shared sacrifice begins with a common hope in the untapped and still undiscovered potential of the great people of California. God’s wise providence has brought together a vibrant diversity of aspirations and ambitions to this golden shore. May God’s wisdom and boundless charity help us surmount the walls of indifference and indecision to work together to make California’s budget a work of justice. We are the stewards of the talents and treasures given to this favored place. Let us employ the faith that can bridge the daunting political chasm before us and reawaken the California dream in the hearts of all. 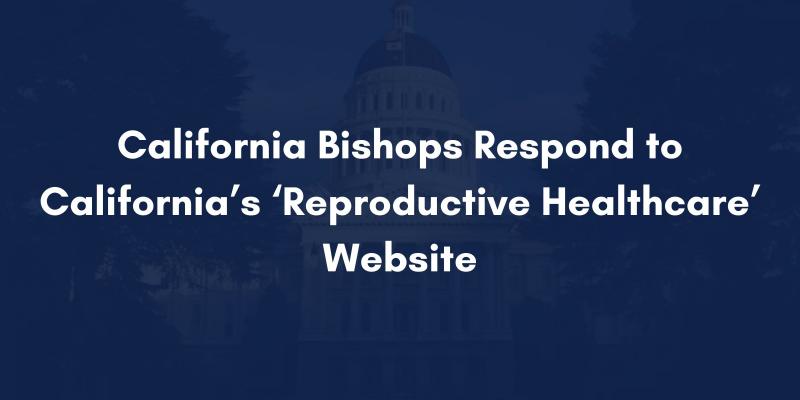 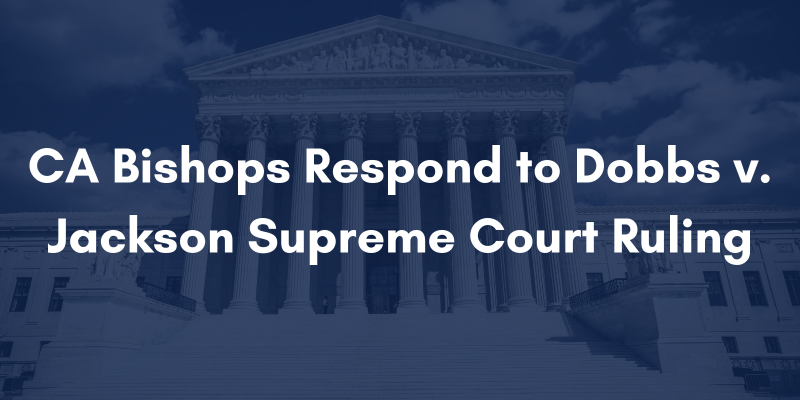 CA Bishops Respond to Dobbs v. Jackson Supreme Court Ruling
While we celebrate this decision - the culmination of prayer and decades of legislative advocacy, life-affirming events, committing time and resources to pregnancy centers, and walking with families facing an unplanned pregnancy – in many ways, our work has just begun.