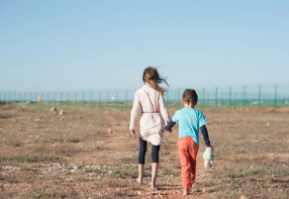 The aftermath of hurricanes and other natural disasters, and civil unrest in Central America has created a surge in the number of migrants crossing the U.S. – Mexico border, with an especially alarming number of unaccompanied children entering the U.S.

Children as young as seven and eight years – old are crossing into the United States by themselves. In conjunction with San Bernardino County and Catholic Charities of San Diego, the Diocese of San Bernardino are at the helm assisting with this humanitarian crisis. Reports state there are 15,000 unaccompanied minors currently being held in the U.S.

Families with small children walk over a thousand miles from Central America through Mexico, fleeing gang violence, cartels, and seeking security. They often arrive at the border with literally nothing but the clothes on their backs. Due to the ‘Remain in Mexico’ policy, they camp in tents and shelters across the border for around 18 months, awaiting their turn to seek asylum through appropriate channels. As a parent, imagine how desperate conditions would have to be for you to walk a thousand miles with your 3-4 children under the age of 6, and then camp for a year in extreme weather by a mosquito infested river – only then to reach such desperation as to allow your child or children to cross into another country without supervision.

The Catholic Church actively assists these minors, who Sister Chilee Okoko of the Diocese of San Bernardino says “require special conditions and care” because of their age.

Okoko works with the Galilee House, which is an intake center for migrants. She also sits on the committee for Operation Bienvenido, headed by Bishop Albert Rojas of the Diocese of San Bernardino, which meets regularly to assess and find ways to provide for the needs of the increasing number of children seeking refuge.

“We provide food, clothing, medications, and there are so many things they need,” said Sr. Okoko.

In years past, refugees were commonly housed for a day or two before being connected with family members living in the U.S. The pandemic's realities have made that process much longer, with COVID-19 positive migrants being housed in hotels until they recover. The others who test negative are assisted, but the young ages of many migrants make it challenging to contact relatives.

Okoko lamented that the programs usually take in approximately 200 people per day. Still, that number is only rough and often underestimated as migrants arrive continuously from morning to night each day.